Ida Lewis was the daughter of a light house keeper. Her father had to row two hundred yards each morning and night to Lime Rock in Newport, Rhode Island to operate the lighthouse. Eventually a permanent home for the light house keeper and his family was built on the rock. After her father died in 1873, Ida Lewis (age 37) was made assistant light keeper to her mother. Eight years later she was appointed the light house keeper which she managed until her death in 1911. 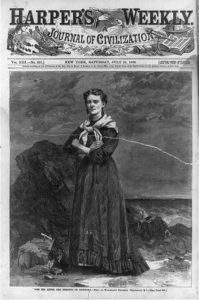 Estimates of the number of people she rescued ranged between 20 – 40, She said she never counted how many people she had rescued, but it is known that she was only a teenager when she made her first rescue. When Ida was criticized because it was considered unladylike to row a boat, she responded “None – but a donkey would consider it ‘un-feminine’ to save lives.” 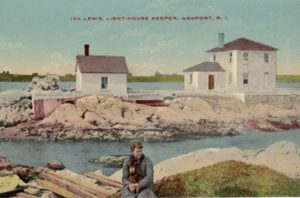 A few of her rescues included:

She received recognition and awards because of her brave rescues:

A song, “The Ocean Waves Dashed Wildly High,” was composed about her, respectfully dedicated to the Heroine of New Port Lime Rock, Miss Ida Lewis.

Her rescues were described in magazines and newspapers. 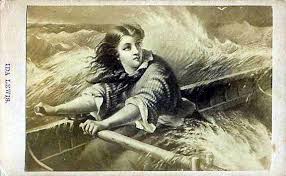 She never hears the voice of distress, night or day, without jumping into her little craft and proceeding to the scene of trouble. [New York Times 1869] In 1924, the light house was renamed in her honor. All of the risks she took were recognized in 2018 when Ida Lewis became the first woman to have a roadway in Arlington Cemetery named for her.